A concise history of modern India

In a second edition of their successful Concise History of Modern India, Barbara Metcalf and Thomas Metcalf explore India’s modern history afresh and update the events of the 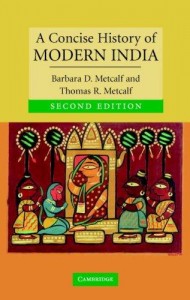 last decade. These include the takeover of Congress from the seemingly entrenched Hindu nationalist party in 2004, India’s huge advances in technology and the country’s new role as a major player in world affairs. From the days of the Mughals, through the British Empire, and into Independence, the country has been transformed by its institutional structures. It is these institutions which have helped bring about the social, cultural and economic changes that have taken place over the last half century and paved the way for the modern success story. Despite these advances, poverty, social inequality and religious division still fester. In response to these dilemmas, the book grapples with questions of caste and religious identity, and the nature of the Indian nation.