The home and the world

Rabindranath Tagore’s powerful novel, set on a Bengali noble’s estate in 1908, is both a love story and a novel of political 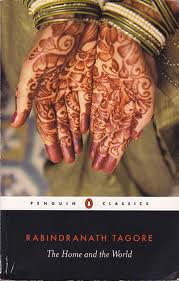 awakening. The central character, Bimala, is torn between the duties owed to her husband, Nikhil, and the demands made on her by the radical leader Sandip. Her attempts to resolve the irreconcilable pressures of the home and the world reflect the conflict in India itself, and the tragic outcome foreshadows the unrest that accompanied Partition in 1947.During his prolific career Rabindranath Tagore was recognized as Bengal’s major writer. He was an outstanding novelist, poet, playwright, painter, musician and educator. A leading figure in the Indian nationalist movement and a friend of Gandhi, Tagore was awarded the Nobel Prize for Literature in 1913.

Bimala : Love is a vagabond, who can make his flowers bloom in the wayside dust, better than in the crystal jars kept in the drawning-room.

Nikhil : Perfect gain is the best of all; but if that is impossible, then the next best gain is perfect loosing

Nikhil : I am willing to serve my country; but my worship I reserve for Right which is far greater than my country. To worship my country as a god is to bring a curse upon it.

Nikhil : To win an argument does not lead to happiness. Her difference of opinion is not due to any inequalty of intelligence, but rather to dissimilarity of nature.

Nikhil : Man is infinitely more than the natural science of himself. […] You want to find the truth of man from your science teachers, and not from your own inner being.

Nikhil : At one time I had an idea of making him a charity allowance, « but », said my master, « your gift may destroy the man, it cannot destroy the hardship of his lot. »

Bimala : Can freedom – empty freedom – be given and taken so easily as all that ? It is like setting a fish free in the sky – for how can I move or live outside the atmosphere of loving care which has always sustained me ?

Amulya : No one can kill the soul. Killing is a mere word. So also is the taking away of money. Whose is the money . No one has created it. No one can take it away with him when he departs from life, for it is no part of the soul.

Shiva is the Lord of Chaos. He is all Joy. He will destroy our bonds.